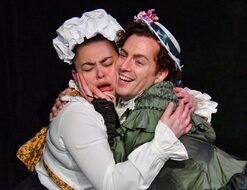 Me (right) as Betty
Custom Made Theatre's Cloud 9

Mazzetti particularly shines, never merely pulling a 180 if he can also make his body turn limp or add an extra swivel or flourish in the process. He’s both as stately as a drag queen and as delicate as an ingenue, liable at any moment to faint, sob, sigh and have an orgasm, possibly all at once. When his Betty says, by way of introduction, “What men want is what I want to be,” you can see him willing emptiness into his moist eyes as if he’s drawing a curtain of ignorance.
- by Patricia L. Morin, Theatrius 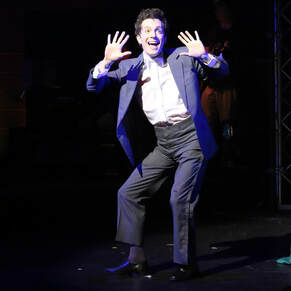 Me as Franz
​Pacific Coast Repertory Theatre's Rock of Ages

​
"There are many additional standouts in this very talented cast, especially.…Mario Mazzetti as the developer’s conflicted son Franz."
-Sally Hogarty, East Bay Times

"The uptight, greedy German property developer Hertz and his son Franz played with the perfect level of lovable evil by Steve Wilner and the camp excellent Mario Mazzetti....Mazzetti steals the second act with his wonderful “Hit Me with Your Best Shot”
- Vince Mediaa, VMedia Backstage 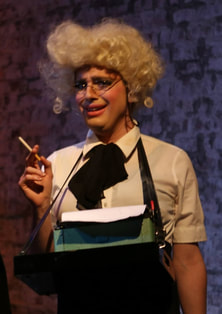 Me as Typist/Guard
Hell in a Handbag Productions' Caged Dames

"Mario Mazzetti, as the sarcastic Typist, offer[s an] impressive performances in the period style that the show is spoofing ([he] also look[s] great as [a] dame in drag)."
- Scott C. Morgan, Windy City Times 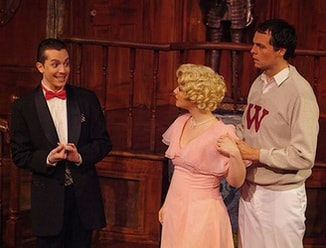 ​"The stellar cast each made the most of their parts. . . . Of particular note [was] Mario Mazzetti, whose hilarious turn as nephew-and-heir Nigel Rancour was so light-footed he actually performed a jeté at one point."
- Carrie Miller, Lake Forest Patch

"A hysterical spoof on the traditional murder-mystery comes to life, so to speak, at the Citadel Theatre Company in Lake Forest . . . Standouts [of the cast] include Mario Mazzetti as the cunning nephew (just watch his shifty eyes)"
- Mira Temkin, Chicago Examiner